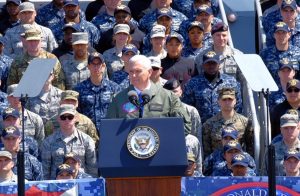 All networks reported that Vice President Pence delivered a speech to American and Japanese service members aboard the USS Ronald Reagan in Yokosuka this morning. NHK said the Vice President issued a strong warning to the DPRK by stressing that “North Korea is the most dangerous and urgent threat to the peace and security of the Asia Pacific.” He went on to say, “We will defeat any attack and meet any use of conventional or nuclear weapons with an overwhelming and effective American response.” TBS quoted him as saying, “The United States once again will stand with our allies and stand up to our enemies,” while Fuji TV quoted him as saying, “The era of strategic patience is over.” All networks reported that the Vice President stated that the Senkaku Islands fall under the scope of Article 5 of the U.S.-Japan Security Treaty.