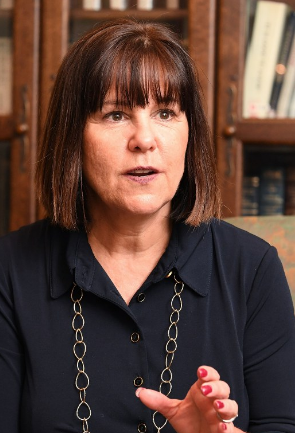 In an interview with Mainichi Shimbun in Tokyo on April 18, Karen Pence, wife of U.S. Vice President Mike Pence, spoke of the importance of art therapy, a psychotherapy she has advocated for more than a decade. “I want more and more people to understand that art therapy is a highly specialized field within psychotherapy,” she said. “I would like to raise the status of the profession.”

Art therapy uses creative activities to treat people with an illness or psychological disorder. Karen says she became involved in promoting art therapy after visiting a hospital in Washington, D.C., in 2006 and seeing children happily coming to the hospital for their art therapy group. Since then she has been involved in a variety of activities, including raising funds to hire an art therapy specialist at a local hospital in the Midwest state of Indiana.

In Tokyo on April 18, she exchanged views with specialists and others involved in art therapy [in Japan]. Touching on the environment surrounding art therapy, she pointed out that there are no university programs in Japan to train specialists. “I would like to see many people study this field. I want people to know that art therapy is a therapeutic method.”

Karen continued her career as an elementary school teacher even after getting married and having children. According to a recent story in the U.S. media, Vice President Pence never eats alone with a woman unless Karen is present.

Asked about the Vice President and her relationship with him, she said, “Mike has a passion for helping people. I think that is why he entered politics and is enjoying his work now.”