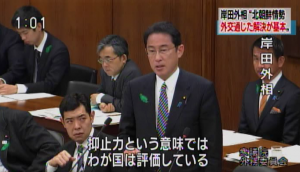 NHK reported this afternoon that in response to Vice President Pence’s remark to Prime Minister Abe on Tuesday that “peace comes through strength,” Foreign Minister Kishida stressed today that although he welcomes the Vice President’s remarks as deterrence, resolving the North Korea issue through diplomacy is the basic policy. He was quoted as saying: “We assume that the remarks represent part of the U.S. review of its North Korea policy. In the sense of deterrence, our nation welcomes the stance that all options are on the table.” Kishida also reportedly stressed the need to maintain close communication with the U.S., saying: “However, we must affirm that the basic policy is to protect peace through diplomacy. It will be important to make sure that the policies of the U.S. and Japan are aligned.”