Hiring steady or up at 70% of firms

More than 70 percent of companies will hire the same number or more new graduates for spring 2018 compared to a year earlier, indicating the labor market will remain favorable for job-seeking students, according to a recent survey conducted by The Yomiuri Shimbun and Nippon TV.

The survey asked 100 major companies in the nation about their hiring of students scheduled to graduate in spring 2018 from universities, graduate schools, two-year colleges, technical colleges, vocational schools and high schools.

Twenty companies, down from 22 in the survey conducted last year, replied they would increase the number of new graduates they hire, while 53 firms, up from 51, said the number would remain around the same as the previous year. Twenty-one companies, up from 19, said they would decrease hiring.

Although slightly more firms than last year are cautious about hiring, the latest survey shows the labor market remains favorable for job-seeking students.

In the logistics and retail industry, in which many businesses are suffering a labor shortage, a relatively higher number of companies said they would hire more workers.

Companies dealing with food and electricity for mainly domestic demand are also highly motivated to hire.

In contrast, many companies in the banking and insurance industry, which is seeing deteriorated earnings due to the Bank of Japan’s negative interest rate policy, said they would hire fewer recruits for next spring. The same survey also found a number of companies seeking a review of recruitment and job-seeking practices.

Fifty-one firms said it would be desirable to introduce a “year-round recruitment” system, while 14 firms said they preferred to keep the current system in which companies hire new graduates all at once.

The survey was conducted from late March to early April.

Logistics and distribution companies, which are facing a labor shortage, are showing their strong desire to hire new graduates.

Yamato Holdings Co., an operator of Yamato Transport Co. that is dealing with rapidly increasing delivery volume, will hire 1,050 new graduates for next spring, up 26 percent from a year earlier.

Manufacturers remain solid in their recruitment. Five automobile-related firms, including Toyota Motor Corp., and six electronics companies, including Hitachi Ltd., said their hiring levels would remain the same or increase.

Despite growing uncertainty over the global economic outlook following the inauguration of U.S. President Donald Trump’s administration, among other events, many manufacturers remain positive about “expanding businesses and passing down technical know-how,” according to one electronics company surveyed.

Among companies that operate mainly in Japan, Central Japan Railway Co. said it had plans to increase its hiring.

In the banking and insurance industry, however, companies remain cautious.

Sumitomo Mitsui Banking Corp. plans to hire 800 new employees, down 40 percent from a year earlier. Five out of eight firms in the same industry said they would reduce their hiring.

For students looking for a job in the financial industry, the job-hunting environment will be more severe. 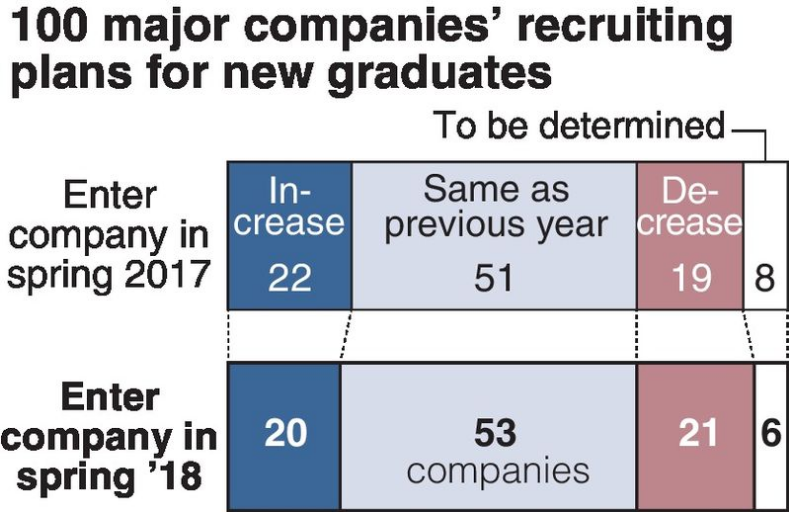