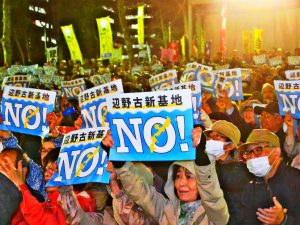 Okinawa Times and Ryukyu Shimpo wrote that a rally protesting against the plan to construct the FRF at Henoko was held at Hibiya Park in Tokyo on Wednesday. The organizer announced that about 3,500 people participated in the demonstration and that it will organize another rally near the National Diet Building on June 10. Hiroji Yamashiro, the chairman of the Okinawa Peace Movement Center who was recently released after five months in police custody, called on the protesters to help stop the FRF construction at Henoko. Lawmakers from the Democratic Party, Japanese Communist Party, and other opposition parties participated in the rally.