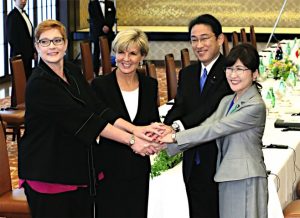 All papers reported on the 2+2 foreign and defense ministers’ meeting between Japan and Australia that was held in Tokyo on Thursday. The two nations agreed to strengthen coordination with the U.S. to apply pressure on North Korea and released a joint statement condemning Pyongyang for its nuclear and missile development. Australian Foreign Minister Bishop told a press conference after the meeting that North Korea’s illegal actions violate UNSC resolutions and that more should be done by China to pressure the DPRK.

Prime Minister Abe met separately with Australian Foreign Minister Bishop and Defense Minister Payne at the Kantei on Thursday, during which they discussed such issues as defense cooperation between Japan and Australia and the importance of freedom of navigation with China’s increasing maritime activities in mind.