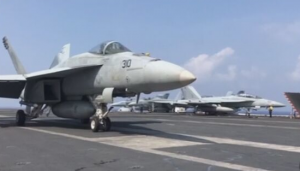 NHK and several other networks reported at noon on an ASDF announcement that SDF fighters and U.S. carrier-borne aircraft will conduct joint exercises this afternoon. According to the networks, two ASDF F-15 fighters belonging to Naha base, two FA-18 fighters assigned to the USS Carl Vinson, and two MSDF escort ships will participate in the joint drills over the Pacific Ocean east of Okinawa. NHK said the USS Carl Vinson is currently heading north toward the Korean Peninsula while participating in the joint exercises with the MSDF, adding that joint drills with the ASDF are aimed at keeping North Korea in check.