Okinawans mourn death of woman killed by U.S. base worker 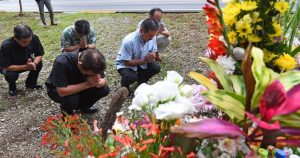 Friday evening’s Mainichi, Nikkei, and Tokyo Shimbun ran reports on the first anniversary of the killing of an Okinawa woman by Kenneth Franklin Shinzato, a former Marine and civilian employee at Kadena Air Base. People mourning the woman’s death visited the site of the incident in Onna Village on Friday. The head of the Defense Ministry’s Okinawa bureau was among the visitors. Okinawa Governor Onaga told a news conference that he has renewed his resolve to address the issue of accidents and incidents related to the concentration of U.S. bases in Okinawa.