According to the Nikkei Inc./TV Tokyo public opinion poll conducted on April 27–30, the cabinet’s approval rating was 60%, changing little from the 62% found in the previous poll [conducted on March 24–26]. The government has been rocked by a string of gaffes and scandals. Among them is the resignation of Masahiro Imamura, the disaster reconstruction minister who deemed it a “good thing” that the 2011 earthquake and tsunami struck the northeastern Tohoku region rather than the Tokyo area. But these mishaps seem to have had negligible impact on the cabinet support rate. Backing among respondents with no party affiliation, accounting for about 30% of the total, remained essentially unchanged from the previous month, with approval falling from 38% to 36%.

Of the 64% accusing the Abe administration of slackness, 51% still said they support the cabinet. A senior official in the ruling coalition said this is “probably a sign that the public is looking for a stable government, given the tensions over North Korea.” “The public is calm for now, but we can’t be complacent,” the official said, indicating that the coalition will keep watching the polls.

The lack of influence of parties besides the ruling Liberal Democratic Party is likely another factor. Support for the opposition Democratic Party sits at just 9% and has remained stuck at around 10% even as the party has since February aggressively pursued a scandal involving the cut-rate sale of state-owned land to Moritomo Gakuen school corporation.

A top official in the Liberal Democratic Party commented, “The support rate is high because the other political parties’ have a weak presence.”

[The survey was conducted on April 27–30 by Nikkei Research Inc. via random-digit dialing (to both landlines and mobile phones). It drew 1,579 responses from people aged 18 and older nationwide, for a response rate of 48.4%.] 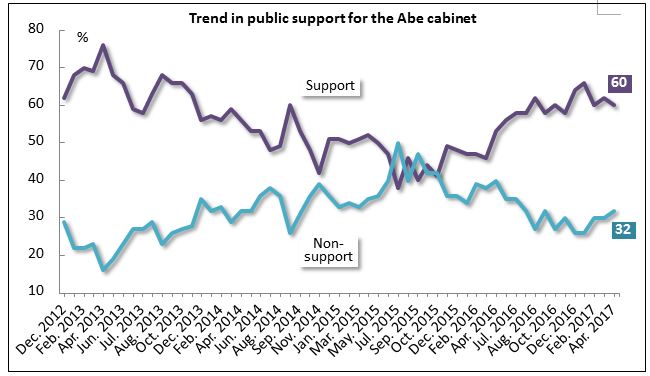