About 80 percent of major companies in Japan have increased the proportion of female employees in managerial posts — meaning section chief or higher — since the Law on Promotion of Women’s Participation and Advancement in the Workplace was enforced in April 2016, according to a Yomiuri Shimbun survey.

The results reflect the positive effects of companies’ programs for female workers, such as measures for work-life balance and training seminars.

Females accounted for 8.3 percent of workers in managerial positions in April 2017, according to the survey. However, this is far below the government’s goal of 30 percent by 2020.

The Yomiuri Shimbun sent out a questionnaire to 121 leading companies in the automotive, electrical machinery, food, trade and other industries in April, with 116 of them responding. The survey asked about the number of female workers in managerial and other positions in April 2015, 2016 and 2017, with some companies providing their latest available figures, such as the end of March or the end of December.

According to the survey results, females accounted for 6.9 percent of workers in managerial posts in April 2015 and 7.5 percent in the same month in 2016. The figure increased to 8.3 percent in 2017.

The number of companies in which the percentage increased the year after the law took effect stood at 96, or 82.8 percent.

When asked what measures were taken to promote women’s active participation and advancement, with multiple answers allowed, 86.2 percent said they introduced or improved work-life balance programs, while 64.7 percent said they organized educational and training programs for female workers. These were the top two responses.

On the other hand, the proportion of regular workers has not increased, hovering around the 24 percent range over the three years.

The law obliges companies with 301 employees or more, and also state and local governments, to compile and publicize action plans for women’s active participation and advancement.

The entities are required to set numerical targets on employment and appointments in the action plans. The kinds of targets to be set up are left to each entity’s discretion. The law does not carry punitive provisions for those that fail to come up with action plans or fail to meet numerical targets. Companies with 300 employees or less are obliged to make efforts to meet the law’s requirements.

According to the survey, 96 companies have numerical targets for female managerial positions. Only 13 companies adopted the government’s goal of “30 percent by 2020” or set a higher target. One company has met its target. The 13 companies are in such industries as distribution and financial industries, which have employed a higher number of female employees.

The government goal was set in 2003. Although it took into consideration the international goals presented by the United Nations and the circumstances of other countries, it did not ignite social interest.

But the goal gained recognition after Prime Minister Shinzo Abe’s second Cabinet, established in 2012, set women’s active participation as one of its key policy items.

“An increase in the proportion of female managerial workers is a small change, but a big step,” Hosei University Prof. Emiko Takeishi said. “But with regular female workers currently hovering at 24 percent, it’s impossible to see female executives reach 30 percent.”

“More women should be hired to meet the circumstances of each company, and it is important to foster them for managerial positions without decreasing the number of female hires,” an expert of female labor studies said.

“Reforming work styles is also needed, such as correcting long working hours, as well as how to run organizations.” 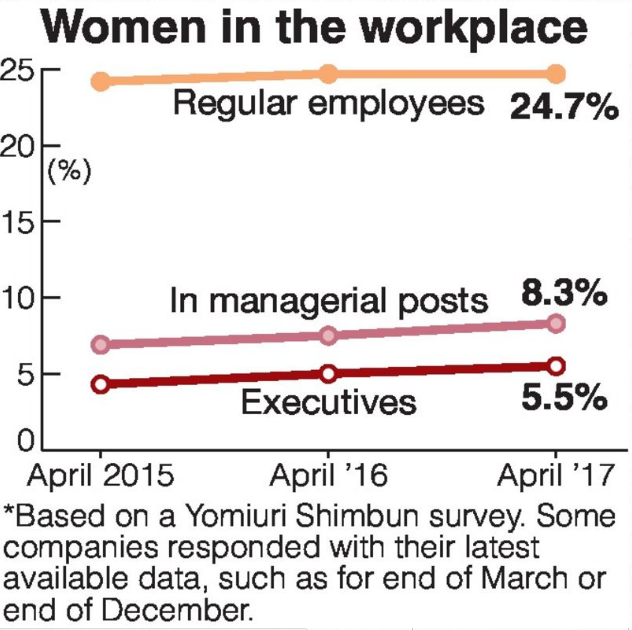