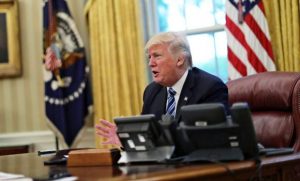 All Wednesday papers reported on remarks made by President Trump during an interview with Bloomberg News on May 1, during which he reportedly stated that he would meet with North Korean leader Kim Jong Un “under the right circumstances.” The papers wrote, however, that it appears unlikely that a meeting between the President and the DPRK leader will be realized anytime soon because North Korea has not yet met any of the conditions, including abolishing its nuclear program, for a meeting with the U.S. President. White House Press Secretary Spicer said at a press briefing that the conditions clearly have not been met.