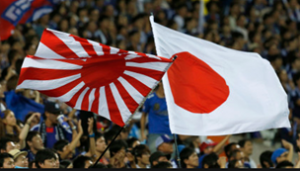 Most papers reported on Chief Cabinet Secretary Suga’s press remarks on Monday, in which he took issue with a recent decision by the Asian Football Confederation (AFC) to discipline the Japanese soccer team Kawasaki Frontale for “discrimination and spectator misconduct” at a match in South Korea. The Japanese team’s fans displayed a Rising Sun flag at an April 25 Asian Champions League match against an ROK team. The AFC referred to it as “a banner with a discriminatory symbol relating to national origin and political opinion.” The government spokesman explained that the Rising Sun flag is used not only by the SDF but is also displayed widely across Japan to celebrate seasonal festivals and large catches of fish.