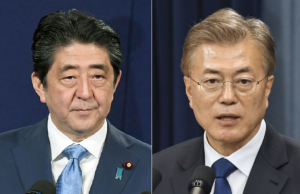 All papers front-paged reports on the first teleconference between Prime Minister Abe and new South Korean President Moon Jae-in on Thursday, during which the two leaders confirmed close cooperation in responding to North Korea’s nuclear and missile development. However, there were differences in their views on how to deal with the comfort women issue. Although Abe told Moon that it is important to implement the internationally recognized agreement responsibly, the new ROK leader said that there is strong opposition to the agreement in South Korea. Moon added that it is necessary to resolve history issues wisely to develop bilateral relations. Asahi wrote that although Moon did not directly refer to “renegotiating” the agreement, he indicated his willingness to do so. Mainichi and Yomiuri wrote that the GOJ will keep a close eye on future moves by Moon with regard to the comfort women accord.