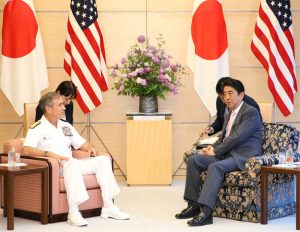 All papers reported on a meeting between Prime Minister Abe and visiting PACOM Commander Harris at the Kantei on Tuesday, saying that the two officials agreed to strengthen U.S.-Japan cooperation in responding to North Korea, which launched another ballistic missile on Sunday. Abe reportedly told the commander that the missile launch was absolutely unacceptable because it posed a grave threat to both the U.S. and Japan, and that it is necessary for them to cooperate in applying pressure on Pyongyang. Admiral Harris reportedly echoed Abe’s view by saying that North Korea’s provocations are absolutely unacceptable. Abe added that the SDF’s joint drills with the USS Carl Vinson Strike Group in April demonstrated the two nations’ determination to ensure peace and stability in the region. The premier and the admiral also discussed the South and East China Seas, where China has been increasing its activities. Admiral Harris also held meetings with Foreign Minister Kishida and Defense Minister Inada.