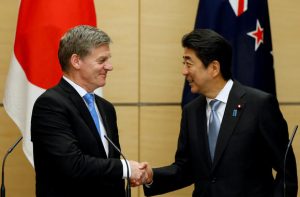 Mainichi, Yomiuri, and Nikkei wrote that Prime Minister Abe and his New Zealand counterpart English agreed at their meeting at the Kantei on Wednesday that their nations will closely cooperate in effectuating the TPP agreement at an early date. Mainichi wrote that the two nations will aim to effectuate the accord without the participation of the U.S. Nikkei carried its one-on-one interview with Prime Minister English, during which he commented on the “TPP 11” by saying that New Zealand will not try to rework the accord agreed upon by the 12 member states, including tariff rates.

In a related story, Yomiuri wrote that although Japan hopes to take the lead and confirm unity in discussions at a ministerial meeting of the 11 TPP nations to be held in Vietnam on May 21, there are still differences between the member states over the TPP 11 idea.