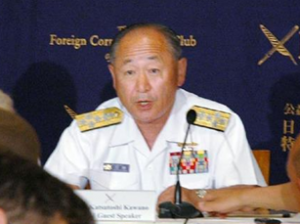 Most papers took up SDF Joint Staff chief Kawano’s remarks yesterday at the Foreign Correspondents Club of Japan. The admiral thanked Prime Minister Abe for his proposal to make the SDF’s existence explicit in the language of the Constitution. He said: “It would be extremely welcome for the Constitution to set forth legal justification for the existence of the SDF.” He stressed that he was expressing his “personal” opinion because making a comment on the Constitution in his capacity as the top SDF official would be inappropriate. Liberal dailies found his remarks problematic since the SDF Law prohibits personnel from engaging in “political conduct.”