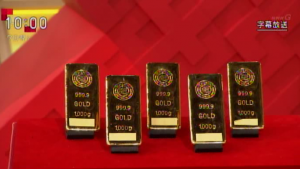 NHK’s “Close-up Gendai +” reported on the smuggling of gold into Japan, saying it has surged since Japan’s consumption tax was raised from 5 to 8 percent in April 2014. The program said although travelers need to declare gold bars at customs and pay the 8 percent consumption tax, couriers disguised as tourists bring in gold from Asia, mainly South Korea, without declaring it. The program said Japan has become a target because the current law imposes only light penalties for such crime.