25% to vote for LDP in Tokyo poll, Yomiuri poll

LDP candidates were followed by those from Tomin First no Kai (Tokyoites first group), a regional political party led by Tokyo Gov. Yuriko Koike, at 22 percent, Komeito and the Japanese Communist Party candidates at 6 percent each, and Democratic Party candidates at 5 percent. Twenty-six percent of respondents did not provide an answer to the question.

The official start of the election campaign is scheduled for June 23, with voting and counting set for July 2.

In a survey conducted shortly after the official start of the last election in 2013, the LDP had 38 percent support from respondents, while the Democratic Party of Japan, the current DP, had 10 percent support. The LDP won 59 seats and the then DPJ 15 seats, but both saw a decline in their support in the latest survey.

When asked if they were interested in the Tokyo election, those who replied “very much interested” and “somewhat interested” totaled 83 percent, up 10 percentage points from the 2013 survey.

The approval rating for Koike was 69 percent. Fifty-three percent of respondents said they “had expectations” for Tomin First no Kai, while 36 percent did not.

The survey was conducted on Saturday and Sunday among eligible voters in Tokyo using a random digit dialing method. Among 2,380 households with eligible voters, 1,478 people, or 62 percent, gave valid answers. 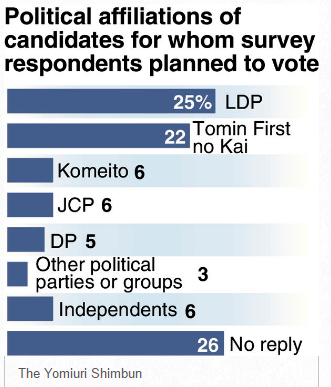