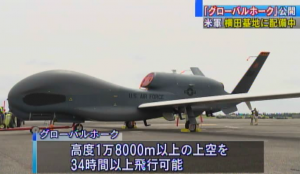 TV Asahi reported that the U.S. Air Force showed to the media today the “Global Hawk” unmanned surveillance aircraft that is temporarily deployed at Yokota AB in Tokyo. The network said the aircraft can fly at an altitude of 18,000 meters for more than 34 hours, adding that the aircraft will be controlled from the U.S. mainland via satellite. There are currently four Global Hawks deployed at Yokota. The network speculated that while the USAF explained that the deployment was to avoid typhoons in Guam in summer, it is aimed at conducting warning and surveillance activities for North Korea’s ballistic missiles and the Chinese military.