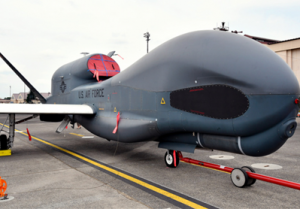 Asahi wrote that the USAF showed to local media representatives yesterday one of the “Global Hawk” UAVs that are temporarily deployed at Yokota AB, quoting a USAF spokesman as saying that the aircraft are engaged in a range of operations in the region, such as anti-terrorism, anti-piracy, and humanitarian assistance. While noting that four Global Hawks are currently deployed at the installation from Guam to avoid typhoons there, the same U.S. official justified the deployment by saying that communications with Japanese aviation authorities are easy because the base is located near central Tokyo. Explaining that Japan has decided to procure three such planes for deployment in FY2019, the daily said some MOD and SDF officials have concerns about the planned procurement. Other papers ran similar stories.