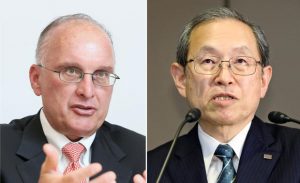 Most papers reported on a meeting held yesterday between Toshiba President Tsunakawa and Western Digital CEO Milligan, noting that they apparently failed to find common ground on the Japanese electronics giant’s plan to deconsolidate its flash memory division. Yomiuri said the U.S. chip manufacturer appears to be determined to thwart the proposed sale of Toshiba Memory to a different bidder, quoting Western Digital COO Cordano as saying in Boston on Tuesday: “Our top priority is to defend company interests.” Yomiuri speculated that Western Digital is desperate to acquire Toshiba Memory to catch up with Samsung Electronics, which is the world’s leading flash memory producer.

Meanwhile, Nikkei claimed in a front-page story that the two executives reached an agreement in principle that Toshiba Memory will be sold to Western Digital, speculating that the U.S. firm still needs to propose a higher bid after obtaining financial contributions possibly from the Innovation Network Corporation of Japan and the Development Bank of Japan to ensure the agreed-upon acquisition. Nikkei added that the regulatory authorities of relevant nations may object to Western Digital’s buyout of Toshiba Memory for anti-trust reasons.