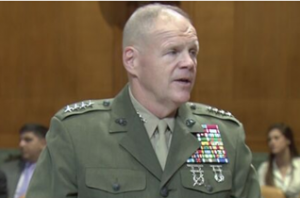 NHK took up a congressional hearing on Wednesday with USMC Commandant Neller, during which he underscored the importance of improving training facilities on Guam to accommodate the troops to be relocated from Okinawa beginning in the early 2020s. The network aired video of him saying: “The Marines are going to go to Guam, and we are going to reduce the number on Okinawa because that’s a political imperative and we’ve made that agreement with the Japanese government. But the Marine Corps have always said that wherever we go, we have to be able to train and maintain the readiness of the force that’s there.” The top Marine explained that the prospects for securing adequate training facilities for the troops on Guam and Tinian are uncertain due to environment concerns. He added that the issue of how the troops will be transported from Guam during contingencies also needs to be resolved before relocating them from Okinawa.