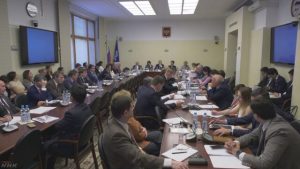 NHK reported online on a meeting in Moscow on Wednesday of Russian politicians who have been involved in parliamentary exchanges with Japan. During the session, which was also attended by Japanese Ambassador Kozuki, some 40 Russian lawmakers expressed strong hope for the economic cooperation initiatives in the areas of medicine and urban development proposed by the Japanese government.