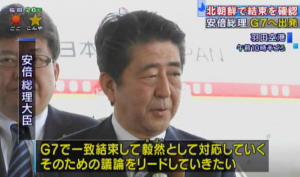 All broadcasters reported that Prime Minister Abe departed this morning for the annual G7 summit in Taormina, Italy, noting that the premier will exchange views on such pressing issues as international terrorism, North Korea, and global trade. Abe was quoted as telling the press upon departure: “I would like to share with other members the view that North Korea is posing a grave threat to the world. The G7 members will unite to deal with North Korea resolutely. I would like to lead the discussion on this matter…. I also hope to join other leaders in expressing resolve to defeat terrorism.” Underscoring that international coordination is extremely important in the war on terrorism, the premier said he would do his utmost to pass the anti-conspiracy legislation during the current Diet session since it will be a key tool to combat and preempt terror acts at home.

NHK added that the G7 members are likely to issue a special statement on terrorism separate from a joint declaration that covers a broad range of topics, such as international security and world trade. It also said that out of deference to the Trump administration, the declaration probably will not include the phrase “counter protectionist measures” that has been adopted annually since 2007.