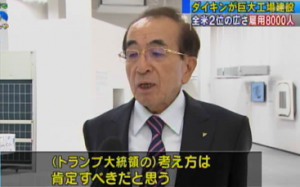 TV-Asahi reported that Daikin Industries has built a massive assembly plant in Texas, noting that it is the the second largest factory in America after a manufacturing plant in Seattle operated by Boeing. The world’s leading air conditioning manufacturer spent some $480 million to construct the assembly line where 8,000 workers are expected to work. The network said the Japanese company’s investment initiative is in line with the Trump administration’s policy of attracting foreign businesses, quoting Daikin Chairman Inoue as saying: “I think President Trump is correct in saying that the U.S. can only coordinate with other nations after it develops America first.”