SDF will introduce Global Hawk but effectiveness is questionable 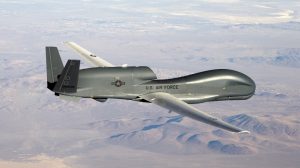 The Self-Defense Forces (SDF) is proceeding with introducing Global Hawks. The SDF incorporated the procurement of three Global Hawks into the current five-year defense build-up program (FY 2014-2018), earmarking about 49 billion yen for the fiscal 2017 budget. The UAVs are slated for deployment to the SDF’s Misawa Base (Aomori Prefecture) after the end of FY 2019.

However, some voice concern about how the SDF will operate the aircraft. “The Global Hawk is said to be used for surveillance of North Korea, but the UAV cannot fly over the country,” said Kunio Orita, the ASDF’s former Air Support Command Commander, who participated in discussions on the procurement of the Global Hawk when he was the director-general of the Air Staff Office Defense Planning and Policy Department. “The Global Hawk will fly right up the border of North Korean air space to monitor the DPRK, but it is questionable whether effective information will be obtained through such flights.”

A Defense Ministry official is also skeptical about the Global Hawk, saying, “The MSDF’s P-3C patrol planes are conducting reconnaissance and surveillance all year round, and it is unclear how roles will be divided between the Global Hawk and the P-3C.”