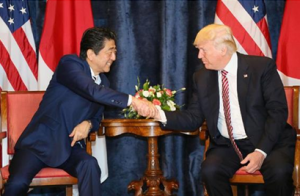 All Saturday morning papers reported that President Trump and Prime Minister Abe met on Friday morning for about 50 minutes ahead of the opening of the G7 Leaders’ Summit in Taormina, Italy, saying that the two leaders confirmed they will increase pressure on North Korea and agreed to take concrete actions to enhance the U.S.-Japan security arrangements. At the onset of the meeting, President Trump reportedly said: “The issues presented by North Korea are a world problem and it will be solved at some point.” According to the papers, the two leaders also reaffirmed the importance of the role of China, which wields a great deal of influence over North Korea, and agreed to strengthen cooperation with South Korea and the UN Security Council in order to step up pressure on the DPRK. The two leaders also confirmed the importance of “free and fair trade.” In addition, they agreed on the importance of holding dialogue with Russia in order to resolve the North Korea and Syria issues.