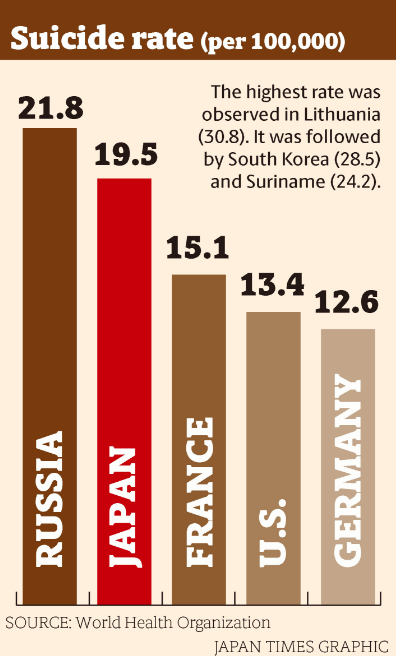 Japan’s suicide rate is the sixth highest in the world and the second worst among eight major industrialized nations, according to the latest government white paper on suicide measures released Tuesday.

This year’s report, approved by the Cabinet, shows that the number of people who took their own life declined to 21,897 in 2016, the lowest level in 22 years. But the figures also show that suicide was the top cause of death among people in five age groups from 15 to 39, a trend that stands out amid a decline in other generations.

The highest rate was observed in Lithuania, where 30.8 out of 100,000 were recorded as having taken their own lives. It was followed by 28.5 in South Korea and 24.2 in Suriname.

The 11.7 suicide rate for Japanese women was the third highest, following South Korea’s 17.3 and Suriname’s 13.4.

Tuesday’s report, the 11th annual installment, indicates that Japan’s campaign against suicide has made some progress. The number of suicides surged in the late 1990s and remained above 30,000 for more than 10 years, with the highest number — 34,427 — recorded in 2003. The figure has remained below 30,000 since 2012.

Since mapping out its first policy principles on suicide countermeasures in 2007, the government has taken a series of steps, including strengthening research on the medical and social causes of suicide, setting up more hotlines, holding seminars for municipal leaders, and beefing up support for people who attempted suicide and for next of kin.

The white paper includes the results of a survey the government carried out last October of 3,000 people aged 20 and older. In the survey, 46.9 percent of the respondents said they hesitate to seek help from others when they are confronted with stress and 23.6 percent said they have contemplated suicide.