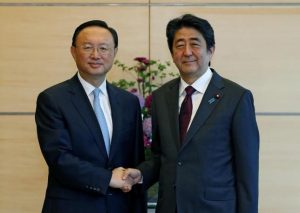 All papers reported on Prime Minister Abe’s meeting with visiting Chinese State Councilor Yang Jiechi at the Kantei on Wednesday, saying that the two officials agreed that Japan and China will increase exchanges between their leaders and other senior officials on the sidelines of international conferences to improve bilateral ties. Asahi speculated that as this year marks the 45th anniversary of diplomatic normalization, Tokyo and Beijing are hoping to improve their relations that have cooled due to the Senkakus and other issues.

Abe and Yang also discussed North Korea. The premier called on China to play a more constructive role in responding to North Korea’s provocations and the two officials agreed that Tokyo and Beijing will work closely to achieve the denuclearization of the Korean Peninsula. According to Mainichi, Yang told Abe that China expects other nations to play constructive roles as well. Yomiuri quoted the Chinese official as saying that China hopes that the North Korea problem will be resolved peacefully and diplomatically. Sankei wrote that differences between Japan and China over how to deal with the DPRK were made clear, as Tokyo is hoping to ratchet up the pressure on Pyongyang, while Beijing has expressed its intention to attach importance to dialogue with North Korea.