Romancing the equation: the Japanese new love affair with math 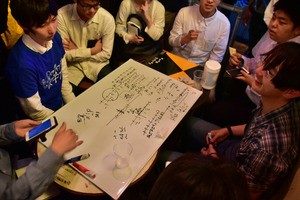 Applause filled a crowded hall in Osaka in early May after an audience of some 150 math lovers listened attentively to lectures by 15 panelists who were given 314 seconds each to present their discoveries and ideas on mathematics. A 17-year-old boy presented a unique idea on the “length of minus,” while another presenter explained how a heart symbol can be rendered using mathematical formulas. The participants of this “Romantic Math Night” event were awed into silence by a lecture presented by a Kyushu University academic on how he proved a mathematical theory that had not been proven in 40 years. A female high school student said: “Even though I couldn’t understand most of his presentation, it was extremely intriguing. The formulas used in the lecture sounded like music!” 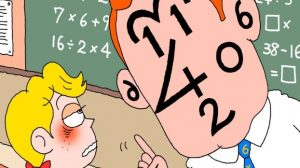 Mathematics is not a subject that many people seem to have a natural affinity for. In fact, many suffer from “math anxiety” stemming from their school days. A recent survey of middle school students from 40 nations found that nearly half of Japanese respondents said math is “boring,” about 20% higher than the average. However, according to Asahi (5/21) and Mainichi (6/29/2016), an increasing number of Japanese find math fascinating nowadays, as demonstrated by the popularity of Romantic Math Night and similar events. “Some people steer clear of me after hearing that I’m a math buff,” said a physics major at Nara Women’s University who attended the Osaka event. “But I feel comfortable attending this type of program.”

The event was organized by a Tokyo company called Wakara that was founded seven years ago by Tomoyuki Horiguchi. In addition to sponsoring math events, the firm arranges lessons for math aficionados and courses in applying statistics to business. Some 400 people now take the courses each month.

The growing interest in mathematics is also evidenced by a surge in sales of math books for laypersons. More than 100,000 copies of a reference book on high school-level math have been sold since its release in 2009, and “Statistics Is the Most Powerful Academic Discipline” (2013) made the bestseller list with sales of 400,000 copies.

Tokyo Institute of Technology geometrician Fumiharu Kato, who regularly lectures on famous mathematicians and their theories to math enthusiasts off campus, says: “Math lovers used to be thought of as geeks or nerds, but not anymore.” The scholar speculates that math has gained popularity in response to TV shows featuring personalities tackling math problems and movies and manga about mathematicians. “Math isn’t just calculation,” he says. “You can learn and enjoy math in a variety of ways.”

According to the articles, some people are also drawn to math on account of the growing demand for employees with knowledge of statistics, which is important for inventory management and quality control. Statisticians, data scientists, mathematicians, and actuaries are some of the “hottest jobs” these days. Japanese companies are eager to hire employees with knowledge of mathematics and statistics so as to cash in on rapid progress in the fields of artificial intelligence and big data analysis. Wakara President Horiguchi explains that people with strong math skills tend to be offered higher salaries and more prestigious positions, especially in the IT and financial sectors.

Studying math not only boosts people’s career prospects but also helps them weather the tumultuous times we live in, says Jin Akiyama (right), a prominent mathematician who has become a TV celebrity by delivering lectures in unique costumes. “Working on math problems is just as mentally challenging as playing Go or Shogi,” he says. “The ability to think deeply and logically is becoming more important than ever.” According to Akiyama, math is the best way to sharpen one’s cognitive skills. He says that although many people suffer from “math phobia,” mathematics is actually like sports or music and everyone can enjoy it in their own way.