Japan’s private sector sets its sights on the moon

TOKYO There is a new race to the moon, and it is the private sector — not governments — that is providing the runners. And unlike last time, Japan is in the thick of the action. If all goes as planned, a Japanese rover will soon be cruising across the lunar landscape for the first time ever.

The race is sponsored by the Google Lunar XPRIZE, a contest for privately funded teams to be the first to land a rover on the surface of the moon, have it travel 500 meters, and transmit high-definition video and images back to Earth. The winner receives $20 million — plus bragging rights. The contest aims to encourage the continuous exploration of the moon through privately led technologies and businesses.

Team Hakuto, as the Japanese effort is called, is a collaborative effort among more than 30 companies, including many startups as well as several established players. The team’s rover, dubbed the Sorato, represents a distillation of Japanese knowledge, with materials, technologies and know-how contributed by a diverse lineup of companies.

THE FINAL FIVE There were originally 33 teams participating in the race, but some bowed out due to a lack of funding, while others were disqualified after they failed to clear all the hurdles set by Google. By the end of March, just five teams remained: Hakuto, an international team, and teams from India, Israel and the U.S.

These teams have met all of the requirements, including securing launch contracts to send their rovers up by the end of this year. As it turns out, all five launches are slated for December, though it is anybody’s guess as to which rocket will lift off first.

The Sorato will piggyback on the same rocket that the team from India has contracted for its rover: the Indian Space Research Organization’s PSLV rocket, which will blast off from the Satish Dhawan Space Centre in Sriharikota, India.

The two rovers will touch down on the moon in the same lander, so if the PSLV is the first of the contracted rockets to leave the earth, both teams stand a chance of claiming the prize. The winner will be whichever rover is first to travel at least 500 meters and send back video and still images.

Team Hakuto is confident it will claim the prize. “We’ll be the first,” said Takeshi Hakamada, CEO of ispace and leader of the team.

Hakamada’s confidence is backed by a diverse range of Japanese technologies that have been incorporated into his team’s rover, the Sorato. 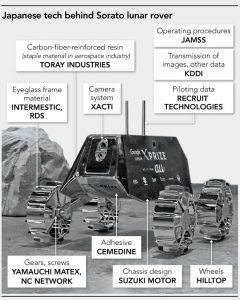 THE RIGHT STUFF Probably the most surprising material utilized in the rover is a resin called Ultem, provided by Intermestic for the wheels and body of the rover. Intermestic operates the Zoff chain of eyeglass stores, and Ultem is the resin the company uses to make its eyeglass frames.

In addition to being strong and lightweight, Ultem can withstand both intense cold and high heat, making it suitable for the lunar surface, where temperatures can rise above 100 C in the daytime and dip below minus 150 C at night.

The Sorato also uses carbon-fiber-reinforced resin, a staple material in the aerospace industry, for its body and parts like the wheel arms. Toray Industries provided help, factory space and test equipment to mold the CRFP into rover components. Japan Airlines will share its knowledge regarding airframe maintenance and transportation.

Some materials are being developed specifically for the Sorato, such as an adhesive created by Cemedine. This material is based on industrial adhesives and solves two problems associated with conventional space-use glues: their high cost and the inability to store them for much longer than two months or so.

KDDI Research has developed software for sending clear, sharp images even when data transmission volumes are limited. The company also provided advice concerning the placement and design of the rover’s two antennas: one the 2.4 gigahertz band, for high-speed transmission over short distances, and the other in the 900 megahertz band, for long-distance transmission of radio signals.

Suzuki provided direction for how the chassis should be structured and analyzed the design to determine whether it would be robust enough to withstand the lunar environment.

AIMING FOR OPTIMAL The Sorato is not meant to be a showcase for advanced technologies. “We were mindful of the need to use tried-and-tested technologies as much as possible,” Hakamada said. Off-the-shelf products, he explained, are more reliable than the one-of-a-kind components often used for space applications. That’s why the Sorato uses commercially available batteries and camera-related electronics.

Team Hakuto originally contracted with a U.S. team to launch its rover, but that team bowed out of the race, and the Japanese side had to scramble to ink an agreement to hitch a ride on the Indian rocket. This required design modifications to the Sorato, including the addition of temperature regulation features, which in turn created a need to shave some weight off the rover. Yamauchi Matex stepped in with its machining technologies, helping to reduce the Sorato’s weight to 4kg, which is 1kg less than the Indian team’s rover. Still on the agenda are modifications to the screws to make the Sorato even lighter.

Weight is not the only difference between the Japanese and Indian rovers. Another is the sizes of the wheels and the heights of their grousers — blade-like features that improve traction in the lunar soil. According to the Indian team, this difference reflects differing expectations regarding the size of the soil particles and the extent to which wheels will sink into the dust. Which team is right? That answer will only come once the rovers land and start to roll.

In addition to making its rover lighter, Team Hakuto still needs to determine whether it has implemented the optimal design modifications needed to suit the Indian rocket. Hakamada knows the contest is far from won. “We will be racing the clock, right to the end.”

Lunar exploration, including orbiting the moon and landing on its surface, began as a heated competition between the U.S. and the former Soviet Union in the 1950s. The Soviets hard-landed an unmanned probe on the lunar surface in 1959 and were the first to capture images of the dark side of the moon. The U.S. took the lead in manned exploration, and in 1969, Apollo 11 became the first manned mission to land on the moon.

Japan’s first lunar probe was the Hiten, also known as the Celestial Maiden. Its launch in 1990 made Japan the third country to orbit the moon.

In 2013, China launched the Chang’e 3 unmanned lunar explorer and landed it successfully on the moon, a feat last done 37 years prior.

If the Sorato rover is successful, the Japanese private sector will have landed on the moon before the nation as a whole.