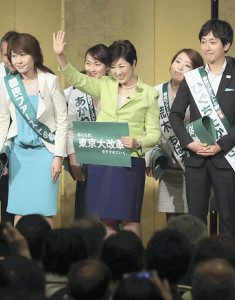 All papers wrote that Tokyo Governor Koike on Thursday became the leader of Tomin First no Kai, a political group formed last September by Tokyo assembly members supporting her, ahead of the metropolitan assembly election on July 2. Koike submitted her resignation to the LDP ahead of a campaign kickoff meeting for Tomin First. The papers speculated that the move is intended to boost public support for the group and intensify her offensive against the LDP ahead of the election. Although the governor enjoys high support ratings, the group’s popularity is still limited. Koike has so far been active only at the metropolitan level, but there is concern within the LDP that her group may become active in national politics by fielding candidates in the next general election.