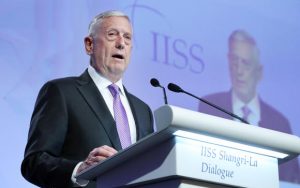 All Saturday evening papers reported on an address delivered by Secretary of Defense Mattis at the Shangri-La Dialogue held in Singapore on Saturday. The papers wrote that the Secretary stated that North Korea is the most urgent and dangerous threat to peace and security in the Asia-Pacific region and that the United States will continue to increase diplomatic and economic pressure on Pyongyang until it finally and permanently abandons its nuclear and missile programs. In addition, the Secretary expressed the hope that China will further exercise its influence over Pyongyang.

Asahi wrote that with China’s increasing activities in the South and East China Seas in mind, the Secretary stated that the United States “cannot accept Chinese actions that impinge on the interests of the international community and undermine the rules-based order.” Yomiuri quoted Mattis as saying that Washington believes that Beijing will come to recognize North Korea as a strategic liability instead of an asset. Asahi wrote that the Secretary clearly stated the U.S. policy of keeping the North Korea issue separate from China’s maritime advancement. However, Lieutenant General He Lei, vice president of China’s Academy of Military Science and the head of China’s delegation at the dialogue, said the Chinese government firmly opposes Secretary Mattis’ remarks because military actions in the waters and airspace around Chinese islands are not within the scope of freedom of navigation. Mainichi wrote that the differences between Washington and Beijing were made clear at the Shangri-La Dialogue, as China expressed strong opposition to Secretary Mattis’ remark that the U.S. remains committed to working with Taiwan. Nikkei speculated that by expressing a firm position on China, Secretary Mattis tried to dispel concerns that a “power vacuum” will be created in the Asia-Pacific region due to the Trump administration’s “inward-looking” posture.