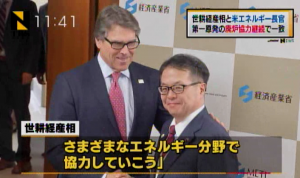 TBS reported at noon on a meeting between Minister of Economy, Trade, and Industry Seko and visiting Secretary of Energy Perry this morning, during which the two ministers agreed on continued U.S.-Japan cooperation toward decommissioning the Fukushima Daiichi nuclear plant. Secretary Perry reportedly said the U.S. will provide any assistance for decontaminating or decommissioning of Fukushima Daiichi. According to the network, Secretary Perry touched upon the recent announcement by President Trump that the U.S. will withdraw from the 2015 Paris Agreement, and said “the United States will remain committed to environmental issues.” In response, Seko reportedly said: “The announcement was regrettable, but the United States is the leader in environmental technology. Let’s work together in various energy-related fields.” According to the network, the two ministers also discussed the Toshiba issue and agreed for their nations to continue to share information on the matter. They also reportedly confirmed that the Toshiba issue should not undermine the foundation of bilateral nuclear cooperation.