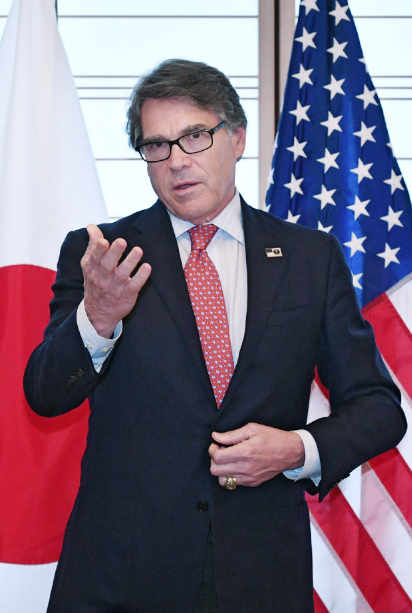 In an interview in Tokyo on June 5 with the Nikkei and other media outlets, U.S. Energy Secretary Rick Perry said in relation to U.S. President Donald Trump’s announcement of his nation’s withdrawal from the Paris climate agreement: “The United States will continue to lead climate change efforts (even after its withdrawal from the Paris pact).” “I hope China will step forward to be a ‘real leader’ on climate issues,” Perry added, encouraging the world’s largest emitter of greenhouse gases to take further climate change countermeasures.

Perry avoided discussing the details of President Trump’s move to renegotiate the climate pact. Asked about the comments Mr. Trump made during the U.S. presidential election campaign that climate change is a “hoax,” Perry said, “Climate change is a problem, and it impacts human lives.” He indicated the U.S. will continue to endeavor to reduce greenhouse gases and emphasized that “technological innovation needs to move forward.”

Regarding dealing with the aftermath of the nuclear power accident in Fukushima, including the decommissioning of TEPCO’s Fukushima Daiichi nuclear power plant, he said, “There are many companies in the U.S. that can handle such accidents.” He expressed the U.S.’s intention to strengthen collaboration in the field of nuclear power, saying, “We’d like to offer our cooperation” to the Japanese government and others.

As regards Toshiba, which is undergoing business rehabilitation, the U.S. government is monitoring the situation of the nuclear power stations currently being  constructed by nuclear power major Westinghouse (WH) in the United States. Perry commented, “We will maintain close contact with the Japanese government [regarding this matter].”