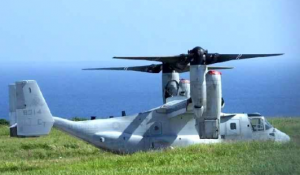 Ryukyu Shimpo front-paged a report saying that an MV-22 Osprey belonging to MCAS Futenma made an emergency landing on Tuesday evening at the Ie Jima Auxiliary Airfield, Okinawa. According to the Marines, the aircraft made the landing after a cockpit warning light came on. No injuries or property damage was reported, and the aircraft left the airfield for Futenma at around 2:00 p.m. on Wednesday. Noting that an AH-1Z attack helicopter and a CH-53 transport helicopter belonging to MCAS Futenma recently made emergency landings, the paper wrote that municipalities hosting U.S. bases have expressed concern. Okinawa Times ran a similar report on page 27.