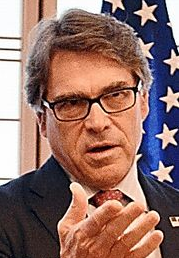 “I hope China will step forward to be a ‘real leader’ on climate change issues.” Those were the sentiments expressed by U.S. Energy Secretary Rick Perry to Asahi Shimbun and other media outlets in Tokyo on June 5. While saying it would be good for China with its serious air pollution problem to take the lead in adopting climate measures, Perry also emphasized that the United States is not backing down from its world leadership role in global warming efforts, even though U.S. President Donald Trump announced his country’s withdrawal from the Paris climate agreement.

Since its announcement that it would exit the climate pact, the United States has been criticized for abandoning its leadership role. At the same time, others speak of their hopes for the role to be played by China, the world’s largest emitter of greenhouse gases. China faces serious air pollution in Beijing and Shanghai. Perry said, “It would be a good challenge for them” to take countermeasures. He added: “I hope China takes this opportunity to become a ‘real leader’ [in climate issues].”

Secretary Perry also emphasized that the United States will continue to fight global warming even after it exits the Paris climate agreement. He said: “Some say China will supplant the United States, but the answer to that is no. We are not backing down.”

He pointed out that “technological innovation will make a difference.” Citing such examples as the small modular nuclear power reactors being developed by laboratories overseen by the U.S. Energy Department, Perry said, “If you care about the environment of your community and of the world, then you need nuclear energy, which has ‘zero emissions.’” In the FY2018 Budget Message that the Trump administration submitted to Congress, however, substantial cuts are made to the government’s research and development budget.

Regarding Trump’s statement that the U.S. will “renegotiate” the terms of the agreement, Perry made the brief comment: “The President’s forte is making deals. He aims to restore U.S. competitiveness.”