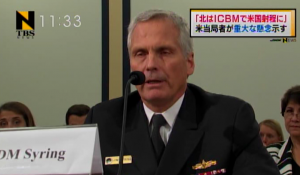 TBS reported at noon that Vice Admiral Syring, the director of the U.S.’s Missile Defense Agency, expressed grave concern over North Korea’s technological advancement over the last six months. He was quoted as saying: “It is incumbent upon us to assume that North Korea today can range the United States with an ICBM carrying a nuclear warhead.” He also reportedly stressed the need to strengthen the missile defense system looking 10 to 15 years ahead.