Of the 31 applicants for refugee status during the 2013–16 period whom the majority of “refugee screening councilors” deemed “appropriate for refugee status,” about 40% (13 applicants) were refused the status by the Minister of Justice, it was learned through research at the Ministry of Justice. “Refugee screening councilors” are private-sector experts appointed by the Minister of Justice [to give their opinion on applications for refugee status]. MOJ has said that it “respects” the views of the councillors, but something different from the official position has been found. (Abridged)

and decisions by Minister of Justice 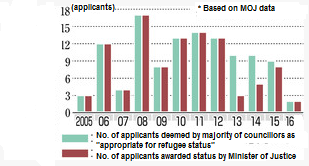