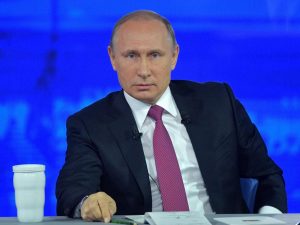 Asahi wrote that Russian President Putin commented on Russia’s relations with Japan by saying he believes it will be possible for the two nations to conduct joint economic activities in the Northern Territories and it is necessary to create an environment that is conducive to resolving the territorial issue.

However, the Russian leader also expressed the view that the presence of the U.S.-Japan Security Treaty is making it difficult to resolve the Northern Territories issue by saying that Japan has security obligation to the U.S. in the region under the treaty. Nikkei interpreted this remark as a call for Tokyo to promise that the U.S. will not deploy its troops on the Northern Territories after the return of the islands.