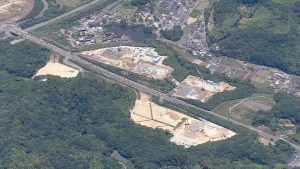 NHK’s “Close-up Gendai +” reported on the scandal involving Kake Educational Institution (Kake Gakuen), saying it was found that MEXT officials exchanged documents suggesting that Prime Minister Abe had tried to use his influence to have the ministry select Kake Gakuen, which is headed by Abe’s close friend, to operate a new veterinary school scheduled to open in a special zone in Ehime Prefecture in 2018. The program said the GOJ claims that the selection process was carried out appropriately because all the meeting minutes were disclosed to ensure transparency and no instructions were issued by the Kantei or the Cabinet Office. The files discovered by the ministry include an email stating that Deputy Chief Cabinet Secretary Hagiura ordered a Cabinet Office official to revise a draft document to be presented at the GOJ advisory council on special zones to limit the establishment of new veterinary schools to regions where none existed, adding that this essentially ruled out applications from organizations other than Kake Gakuen. The program also reported on a comment by Hagiura in which he denied giving any such instructions.