U-2 makes emergency landing at Kadena 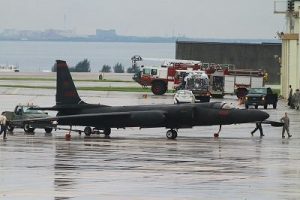 Ryukyu Shimpo and Okinawa Times wrote that a U-2 reconnaissance plane deployed at Osan Air Base in South Korea but temporarily deployed at Kadena Air Base made an emergency landing at Kadena at around 8:22 a.m. on Wednesday. The aircraft was moved to a hangar at a Navy ramp on the base after undergoing a mechanical inspection for 20 minutes on a runway. The Okinawa Times wrote that the Defense Ministry’s Okinawa bureau said that it was notified by the 18th Wing at around 10:00 a.m. that the aircraft made a precautionary landing on account of a minor problem. The MOD bureau informed the governments of the prefecture and surrounding municipalities of the situation via email.