According to the Asahi Shimbun poll on business sentiment targeting 100 leading companies, slightly less than 80% of polled companies reported that the current domestic economy is on a “moderate expansion.” In the previous poll, conducted in October-November last year, 60% of companies reported that the economy was “stagnant.” Bolstered by the favorable economy overseas, Japanese companies’ business sentiment has improved substantially.

The survey is taken twice a year and is conducted in principle through interviews with top corporate executives. The current survey was conducted May 29–June 9.

When asked the reason for their assessment of the economy (up to two responses), the number of companies citing “exports” rose from 6 in last autumn’s survey to 28. All of these companies reported that the economy is “moderately expanding.”

When asked their concerns going forward (up to two responses), 18 companies said “labor shortage,” a dramatic increase from the two companies that gave that response in the previous poll. There was also a spike in concern about missing the opportunity to increase corporate scale and activities due to an inability to secure workers. (Abridged) 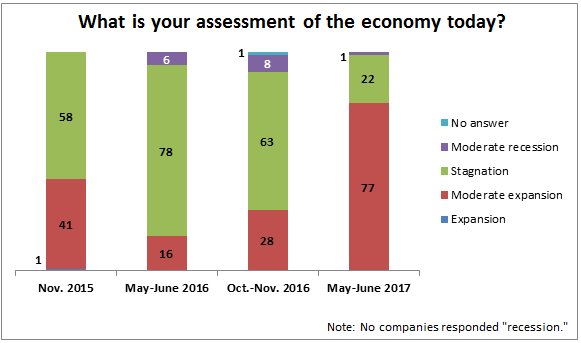