Toshiba teeters on brink of delisting 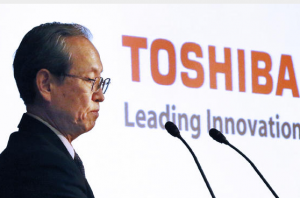 TOKYO — With Toshiba‘s fiscal 2016 results delayed yet again and its shares headed to the Tokyo Stock Exchange’s second section, the embattled conglomerate’s listing now hangs in the balance.

Toshiba has reeled from an accounting scandal in 2015, as well as massive losses at a U.S. nuclear unit that came to light late last year. In the latest embarrassment, the company has postponed until Aug. 10 its annual securities report for the year ended in March.

Toshiba listed on the TSE in 1949, the year the exchange reopened following the end of World War II. The once-mighty industrial group will be moved from the bourse’s first section Aug. 1 and trade in the second section for the first time because the company fell into negative net worth as of the end of March.

That shift carries an automatic removal from mainstay indexes such as the Nikkei Stock Average and the broader Topix. This, in turn, likely will prompt institutional investors to remove Toshiba shares from their index-linked portfolios.

Such selling is expected to dump a little more than 92 billion yen ($826 million) in Toshiba shares on the market, said Hayato Nagayoshi, chief quantitative analyst at Mizuho Securities.

Tomoichiro Kubota, senior market analyst at Matsui Securities, said that “if the proportion of retail investors trading [Toshiba shares] rises, its price movements will grow harsher.” Others shared that assessment.

But moving to the second section is the least of Toshiba’s problems right now, since the company has to clear many hurdles even to maintain its status as a listed company.

The TSE is reviewing Toshiba’s internal control systems to decide whether to remove the company from the exchange’s designation as a “security on alert.” Failure to receive approval for its securities report from auditor PricewaterhouseCoopers Aarata likely would hurt Toshiba’s chances in that review. If the designation is not removed, the company’s shares will be delisted.

President Satoshi Tsunakawa has said Toshiba will cooperate with auditors on all fronts in order to submit an approved report, but it is believed that the company has yet to begin a discussion with PwC Aarata to resolve their disagreement on whether Toshiba must correct past financial reports as well. Reconciling the opposing opinions likely will take time.

Toshiba’s plan to sell its semiconductor memory unit also will be critical to staying on the TSE. Toshiba hopes to patch up its net worth with the money from the deal, and the company aims to reach an agreement on the sale by Wednesday. If Toshiba cannot pull itself out of negative net worth by the end of fiscal 2017, its stock will be removed from the bourse.

Tsunakawa told reporters Friday that he would make all efforts to preserve the company’s credibility. But it would be a hard sell, judging by the stock price movement. Toshiba shares lost 14 yen, or 4.4%, from the day before to close around 308 yen Friday. The company touched a low of 302 yen during the day when the delay of its securities report hit the news wire.