According to an exit poll taken by Kyodo News regarding the Tokyo Metropolitan Assembly election on July 2, some 11.2% of Liberal Democratic Party (LDP) supporters and 13.5% of Democratic Party (DP) supporters said they cast their vote for Tomin First no Kai, the regional political party headed by Tokyo Governor Yuriko Koike. Tomin First also garnered 29.8% of the independent vote. It seems that Tomin First attracted those dissatisfied or critical of the traditional political parties.

Some 12.0% of supporters of Komeito, which engaged in electoral cooperation with Koike for the election, said they voted for Tomin First candidates. In addition, Tomin First won 22.3% of Nippon Ishin (Japan Innovation Party) supporters’ votes and 3.4% of Japanese Communist Party supporters’ ballots, thus enjoying broad support. Some 83.5% of Tomin First supporters voted for their party’s candidates. Tomin First was the top party among all age groups.

Gov. Koike continues to enjoy a high support rating, with a plurality of 69.1% of respondents saying they “support Gov. Koike.” Of those, 45.2% said that they voted for Tomin First candidates. Some 32.5% of pollees said that they took into consideration whether the candidate was supported by Koike in deciding how to vote in the election. Of those, 68.7% cast their ballot for Tomin First.

Polling methodology: The survey was conducted at the 504 polling stations in Tokyo. Responses were received from 25,425 people who had voted. 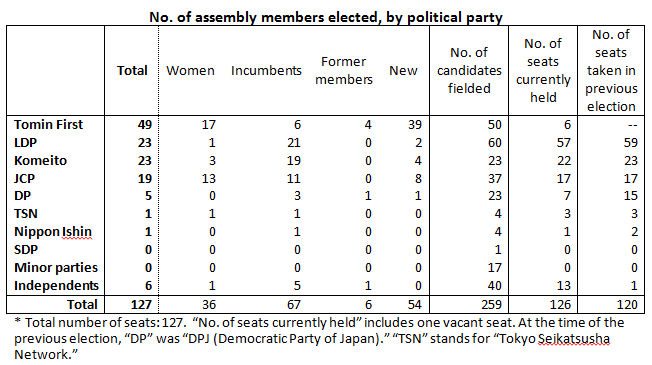 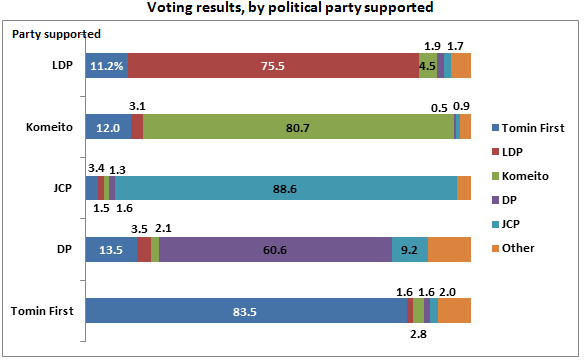