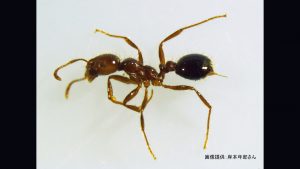 NHK’s “Close-up Gendai +” on Tuesday evening reported on fire ants, which experts say are one of the most dangerous alien species to enter Japan. After the venomous ants that are native to South America were first confirmed in a container that arrived at Osaka Port three weeks ago, they were also spotted at Nagoya Port. The program said once fire ants create a colony, they have incredible power to reproduce, adding that fire ants have entered the U.S., Australia, and China and caused major damage to local livestock and crops. All of the fire ants found in Japan are believed to have come from a single port in China. The program also reported on another alien species, the redback spider, stressing the importance of border control.