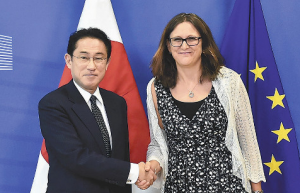 All papers gave top play to reports on a meeting held between Foreign Minister Kishida and EU Trade Commissioner Malmstrom in Brussels on Wednesday, during which the two parties reached a broad agreement on an EPA. According to the papers, Japan agreed to set up a low-tariff quota for European cheese and phase out tariffs on cheese in 15 years, while the EU consented to eliminate its tariffs on Japanese auto exports in seven years. Kishida told reporters after the meeting that Japan and the EU as leaders of free trade reached a high-level and comprehensive agreement that sets a good example for the world. Prime Minister Abe and European Council President Tusk are expected to confirm the agreement at their planned talks to be held in Brussels on Thursday.

Asahi speculated that Japan and the EU reached an agreement in their trade negotiations that have gone on for four years by reciprocally making concessions based on the common goal of taking the lead in free trade. Yomiuri wrote that common concern over growing protectionist sentiments around the world urged Japan and the EU to reach an agreement. Nikkei conjectured that Japan is hoping to take advantage of its trade agreement with the EU to boost its own economy.