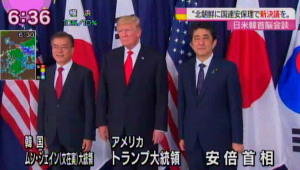 All networks reported this morning that the leaders of the U.S., Japan, and South Korea held a trilateral summit ahead of the G20 summit in Hamburg, Germany, which will begin on Friday evening. It was the first trilateral summit since President Trump and President Moon took office. According to NHK, Prime Minister Abe said at the summit that the latest ICBM launch by North Korea “shows that North Korea has no intention to seriously respond” to the international community and “it is essential for the international community to pressure and urge North Korea to hold serious dialogue.” The premier also reportedly stressed that “holding dialogue for the sake of dialogue” would be meaningless and that the three nations should work closely and seek to adopt a new UNSC resolution that includes strict measures. The network added that the three leaders agreed to increase pressure on Pyongyang and confirmed close cooperation with the U.S., which recently imposed sanctions on Chinese companies and individuals. They also reportedly agreed to send a powerful message at the G20 summit and to urge China to play a more active role.