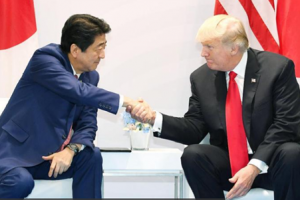 All Sunday papers reported extensively on Sunday’s summit in Hamburg between Prime Minister Abe and President Trump, during which the U.S. leader mentioned the “U.S. trade deficit and reciprocal market access” for the first time in a bilateral meeting with the Japanese premier.  In response, Abe said: “I would like Deputy Prime Minister Aso and Vice President Pence to discuss measures for enhancing the win-win relationship.” The papers said the Trump administration may renew its call for Japan to open its market to American imports, with Nikkei saying that some U.S. industries, including beef and pork, are concerned that market access to Japan will be constrained by the U.S.’s withdrawal from the TPP especially given that Japan has just reached a rough free trade agreement with the EU. Today’s Yomiuri speculated that the Trump administration may further pressure Japan to open its market, as the clout of Commerce Secretary Ross, who is viewed as a trade hawk, is reportedly growing within the U.S. government.