A giant free-trade zone covering nearly 30 percent of world economy will emerge as early as 2019, following an agreement between Japan and the EU on a broad Economic Partnership Agreement (EPA).

Free-trade systems were what supported the growth of the global economy after World War II. The Japan-EU trade pact has major significance as the United States, which led postwar global economic growth, has shifted to a policy of protectionism, and as a result free trade faces a headwind. We hope that the recently forged trade pact will serve as a guiding light to counter protectionism and promote free trade.

Under the Japan-EU EPA, tariffs on Japanese cars, electric appliances as well as European cheese, wine and pork will be eliminated or reduced. The agreement will secure a high level of market liberalization with the rate of tariff elimination on traded items as a whole topping 90 percent.

With the market deregulation, the Japanese and European economies are expected to improve. Especially for Japan, which has limited resources and has developed as a trading nation, free trade is particularly important.

Japan’s domestic market is set to shrink as its population declines. The EU, on the other hand, has a population of approximately 500 million — four times that of Japan. The EPA should serve as an opportunity for Japan to increase exports, such as cars.

Furthermore, if the prices of agricultural products from EU countries are reduced, it will stimulate domestic spending in Japan, whose recovery remains sluggish.

The EPA could also work as leverage to rebuild the world’s free-trade framework.

Effectuation of the Trans-Pacific Partnership (TPP) free-trade agreement signed by 12 nations including Japan and the United States is nowhere in sight after Washington pulled out of the pact, while the EU has been forced to endure sluggish free-trade negotiations with the U.S.

If trade between Japan and EU member countries increases, the United States will have a worse hand in exports to Japan and Europe, which might prompt discussion within the U.S. on rejoining the TPP pact.

In addition, while Britain has decided to leave the EU, if the union’s exports to Japan increase, it could serve as an incentive to prevent other member countries from exiting the union.

Using the EPA as a momentum, Japan should work on expanding free-trade zones while moving forward with negotiations to have the TPP agreement come into effect without the U.S.

At the same time, the Japanese government plans to take measures to protect domestic farmers, as they could come under pressure if strong brands from EU countries such as cheese are sold cheaper in Japan.

However, such protective measures must not descend into pork-barreling. Japan has extended generous support to the country’s farming industry with high tariffs on imports, but has been unable to stop the decline of Japanese farming. Japan instead needs to implement policies to make domestic farmers competitive.

The EU will eliminate tariffs on Japan-made products such as sake and green tea. Taking advantage of Japanese cuisine blossoming overseas, Japan should make efforts to expand exports of domestic produce. 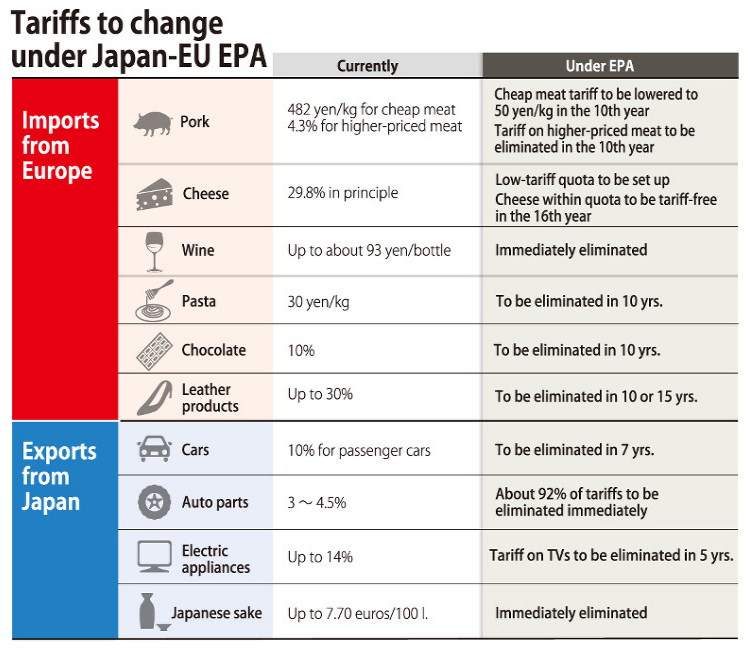